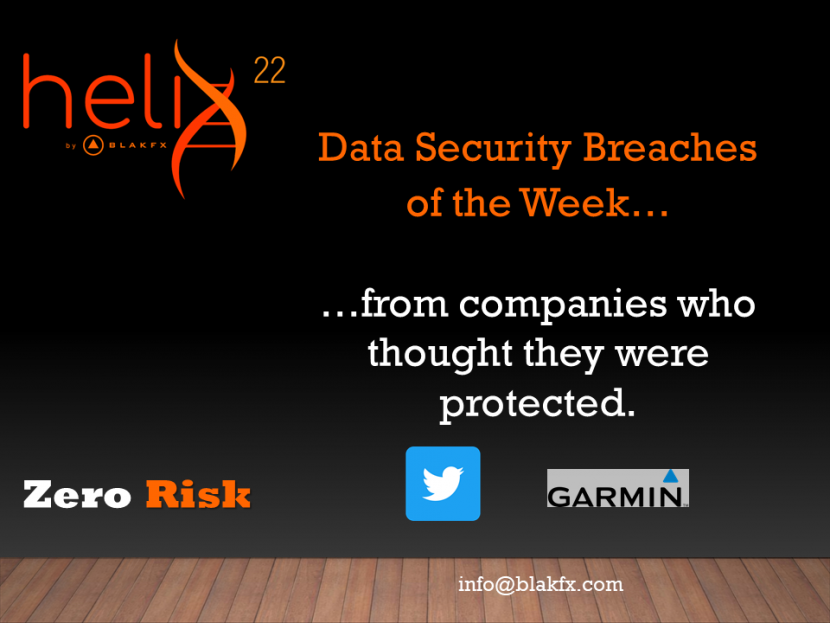 If you are lucky, and I do mean lucky, your organization will not be victimized. However, as Twitter and Garmin found out just this week, your luck will run out despite what I am sure they considered “top-notch” data security efforts

We all know that the Work From Home (WFH) movement has been a boon period for hackers as it has expanded the data attack perimeter. As organizations, firms and nations all struggle to secure their data, hackers have become ubiquitous. In reality, data security has become a line item on your expense ledger and detracts from your bottom-line. Most firms try their best to put into place adequate security measures, but to date, they will likely all eventually fail. Compounding the failure and the data breach itself, is that the cost of a data attack will turn that singe line-item on your IT departments budget into a major cost. The financial implications of a ransomware attack could run into the millions.  You also might expect a dip in stock price.

Finally, it is necessary to add in the cost of fixing the data breach on your system as well as expanding the capabilities and resources available to your IT department moving forward. Once your frim has been breached, there is no immunity from future breaches. Your firm goes right back into the pool.

In addition to financial losses, the cost to your brand, your reputation and most importantly the trust of your clients will be compromised.

At BLAKFX, our Helix22 SDK can reduce your data security risk mitigation amount to $0. We are making the internet a data secure environment.  We have accomplished this through truly innovative thinking and the genius technology of DNA BindingTM.  You see, the vast majority of data security products try to prevent access to the data through firewalls, password managers, real-time detection software or identity tools. Obviously, if and when, a breach occurs, the data is compromised and substantive costs are incurred. As Twitter and Garmin found out, breaches are inevitable despite your best efforts and access to your firms or nations data cannot be prevented by any of these tools.  With DNA BindingTM, the protocol embeds our encryption directly with the data itself. This means that data is always 100% secure. Even in the case of an insider attack, any data that is copied, downloaded, forwarded or saved is rendered useless.

We make such claims as we have invented true user2user encryption (U2U). U2U encryption protects all data from the moment of the first keystroke on any device, to the final reception of the data on the intended users device.  Regardless of the time period involved. There is never a nanosecond when the data is in the clear or accessible by an unauthorized 3rd party. Typical E2E encryption does not protect data until it reaches the key server, by which time it has been in the clear easily long enough to be compromised.  Helix22 truly is the first ever data security product that can protect all your data while at rest, in use as well as in transit.

At BLAKFX, we manage data transmission through the truly brilliant and patented pending universal Helix22 key service. The genius is that the Helix22 encryption originates on your device. By the time the data arrives to our key server, it is already encrypted so all we need to do is issue another key. This key will then only work with the receiving device, which generates the matching key required to open the data. In this protocol, we are truly a “zero-knowledge” server and even if subpoenaed, we can honor the request by just handing over the encrypted gibberish…as that is all we have.  Further, Helix22 also only use keys one-time and then destroys them. This way the data security is future forward prefect. Therefore, in our unique user-to-user encryption (U2U) world, there is zero opportunity at all for any data breach.

Finally, the patented encryption we have developed is mutli-layered and superbly designed. It has proven to be unhackable. We have tested with MI5 and our founders developed Wickr, which since its inception in 2012 has never been hacked and is now utilized by the US military for their communications. Helix22 has been exponentially imagined and secured over that period.

Install the Helix22 SDK and put an end to the risk of a data breach. As Twitter and Garmin found it, you are not doing enough.