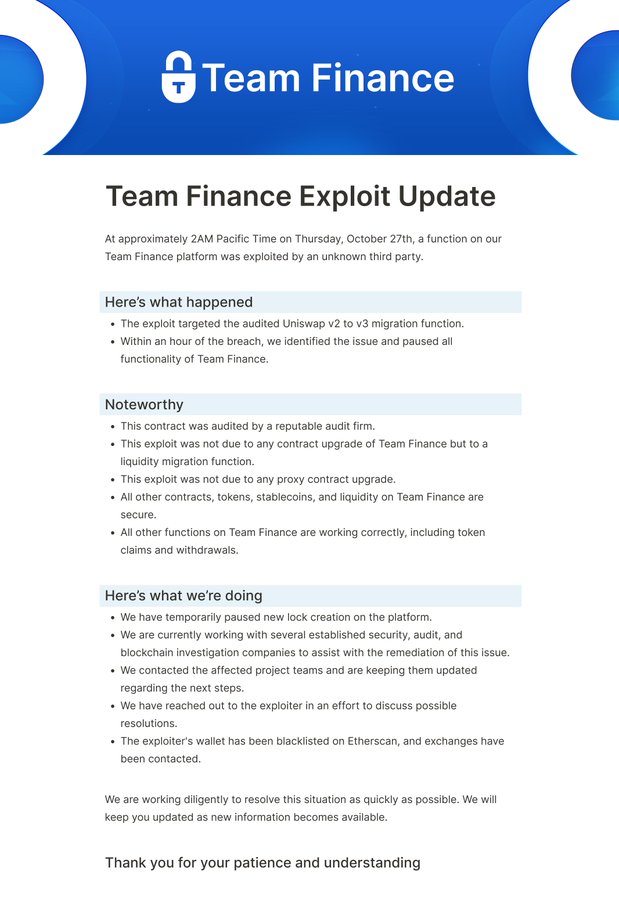 Decentralized finance platform Team Finance confirmed on Thursday that hackers exploited a vulnerability and stole $14.5 million worth of cryptocurrency.

Several blockchain security companies alerted the company of the hack before it released a statement about the issue.

In a twitter statement, Team Finance said an analysis of the incident showed that it began at 2 a.m. PT on Thursday morning.

The exploit allegedly targeted a function on the platform that had been audited by a “reputable” security firm and was “not due to any contract upgrade of Team Finance,” the company claimed.

“We have temporarily paused new lock creation on the platform. We are currently working with several established security, audit, and blockchain investigation companies to assist with the remediation of this issue,” the company said.

“We contacted the affected project teams and are keeping them updated regarding the next steps. We have reached out to the exploiter in an effort to discuss possible resolutions. The exploiter’s wallet has been blacklisted on Etherscan, and exchanges have been contacted.”

Team Finance said that the person behind the incident has not responded yet to their messages. Fabian would not say how large of a bug bounty the hacker is being offered and explained that their plan to making victims whole is by “recovering the funds held by the hacker.”